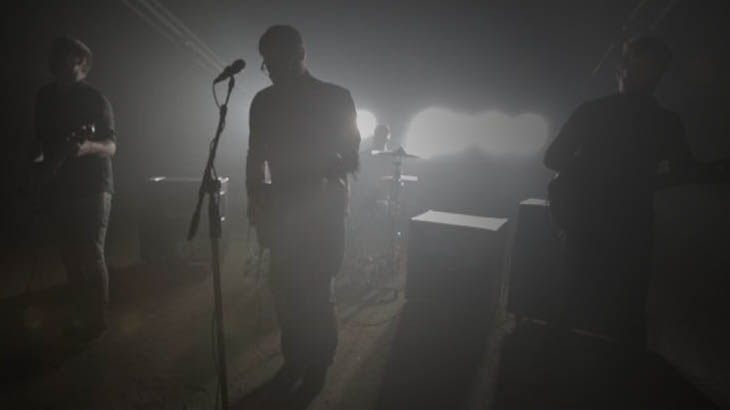 Darwin and the Dinosaur is an Alternative / Post-Punk band from Norwich, England. Alan Hiom (guitar, vocals), Steve Larke (guitar, vocals), James Bates (bass) and Joe Mears (drums) are signed to No Panic! Records.
Formed in 2008, the band blend melodic post-punk with modern alternative-rock to create a rich and profoundly endearing sound. They deal in big riffs, memorable choruses and worship at the heels of the quiet/loud dynamic.

The band name was created using the dinosaur to represent knowing your influences and roots, whilst having a modern take and progressing as bearded men, which is summed up with Darwin. The band has been influenced by music ranging from Californian post-hardcore band Thrice, to 21st Century Scottish greats like Biffy Clyro. The band has an eclecticism that vividly comes to life on record.

The band launched their first EP “English For The Hearing Impaired” in 2009 and their debut full-length album ‘A Thousand Ships’ was released in March 2015. A Thousand Ships shifts between songs carrying a pop aura and those closer to the skate persuasion – Gnarwolves fans, warm your ears to ‘Riff Town Population: You’. Interspersed with slow, twinkling guitar interludes, the album serves as the concise guide to all things that define Darwin and the Dinosaur.

In the between the first EP and the full-length album, the band released seven additional Eps: “The Bear” (2010); four tracks not included on their Eps in “B-Sides and Rarities” (2010); “Darwin & The Dinosaur” (2011); “Merry Christmas” (2012); “Romulus” (2013) and one month later “Bonus Tracks” (2013). The band’s 2014 “Remus” EP has five tracks packed with spiky riffs and vocals verging on the aggressive. Kept ticking over by tuneful instrumental segments, their music invariably impresses as it undulates between those segments and intense, mosh-starting punk rock.
The band have some wonderful song-writing skills and a seriously accomplished sound. Tracks like Theories, Making Friends With Strangers and Riff Town Population: You are loaded with chunky, bouncy riffs and bolstered by some lovely, glittery leads. The band always chooses a great moment to punctuate their songs with a huge power-chord and their music is thoroughly entertaining.

With a European tour now under their belts, it is back to business for Darwin and the Dinosaur as they get to work writing new material for release in late 2016. They continue to evolve into an ever more promising and potent entity on the post-punk scene. These four guys are improving all the time. It is time for you to join the party!